A Rich Picture is a diagram used to capture and organise information visually, using images to explore ideas creatively.

In business analysis they have many uses – for example:

The example above shows how a Rich Picture might be used to analyse the stakeholders for a Hotel Booking System.

The technique is similar to Mind Maps - but makes more use of visual imagery, which can make them easier for business users and other stakeholders to relate to.
You can learn more about Mind Maps in my earlier blog post:
Business Analysis Techniques - Mind Maps

A Rich Picture can be initially be drawn by hand - as "rough notes" during a meeting or workshop.
It can then be enhanced and expanded if needed - the build up a fuller picture of a business scenario.

For example - taking the example used at the top of this blog post - a Hotel Booking System - Stakeholder Analysis.

Imagine that initial analysis has revealed that there are three main groups of stakeholders for the project - Customers, Staff, Suppliers. 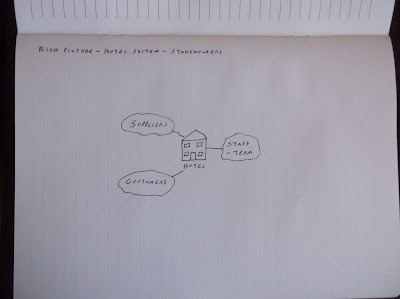 You could start with the diagram shown above - that simply shows the system under investigation in the centre - "Hotel" - with a little sketch of a hotel building to illustrate this. This also shows the three groups of stakeholders link to the central image. 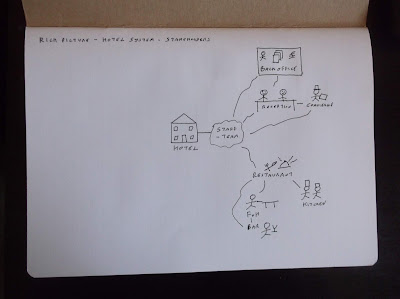 You could then add detail to the diagram step by step. For example - imagine that analysis has showed that Hotel Staff fall into three main groups - Back Office (administration), Reception and Restaurant. This could be shown as above.

Then - as also shown on the diagram - these groups could be broken down further. In the diagram above - for example - staff in the Restaurant have been broken down into Front of House (FoH), Bar and Kitchen. 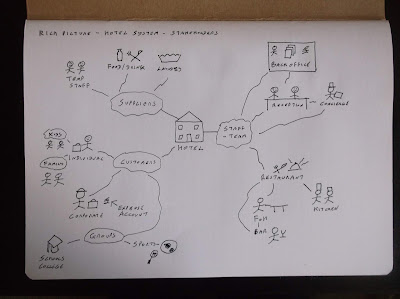 The same could be done with Customers and Suppliers - as shown above.

So - in conclusion - benefits of Rich Pictures:


My online course on Udemy covers the fundamentals of Business Analysis - including a session on Rich Pictures with a detailed case study example. Learn more here -
Course - Stakeholder Analysis

Getting Started in Business Analysis

Getting Started in Business Analysis